A Showcase of Poetry & Art by Diane Gage

the pickle you’re in, sour wine,
desert hermit, perhaps
an end here of our parenthesis?

or a beginning, again,
my sand trickling
through the hourglass

of you
the shards of my shatter
scarring you blue

There along the continuum between memory and remembrance,
a litter of old letters shimmers in the play of shadow

on this day of indulgence, reading between my old life’s lines.
Dust calls to dust, reflecting light’s illusions in a dancing way,

the gaps in matter’s ongoing lie about solidity exposing the secret
of Lot’s wife: a salt pillar can be a shining cloud when you look at it,

with a different full-length feature running on each minute crystal.
Stationary, still, but no statue.  I enter the dazzling maze of it

and am instantly lost in the murmur of a thousand shifting stories
humming like bees concocting the wax and honey of my days on earth.

I am gone for as long as I can bear it; eons, maybe, or minutes.
Which tales will choose me this time? Which thread me back

to how much I love you now, here, in this instant, you who ask me
How was it back then? and I am struck dumb, tongue thick

in my mouth, with a speck in my eye that needs crying out
rendering all a blur, every line a wave, every wave a farewell.

The third poem, Sign Language,  from this reading at Protea Gallery, can be found in Interview, Part 2.

The following poem, Mother Tongue, was part of a reading by Diane Gage at the California Center of the Arts during the exhibition “Tec, Tang, Tarab”

What do we have to know each other by
those of us whose mothers have another tongue —
the slant of a cheek, a taste for song,
the lure of tears in a sigh?

My mother, who can speak to the future one way
and to the past another
says she knows families
who cut that connection in one generation
instead of in two, says she knows
a woman her age had parents who
for fear and shame and hurry
wouldn’t speak with their own children
the old tongue that bound them
even though the new one choked in their throats
or fell from their lips like stones.
My mother says “That’s sad” in English
with no accent, “That’s sad”
in her second language,
my first.

My mother laughs at my accent.
When I say Teach me that language
you knew as a girl,
“It’s been so long,” she says,
“I forget with you.  If you
don’t know already, never mind.”

Nevertheless, she taught me two phrases
in her nearly vestigial tongue.
To je v pravovani jako brapci zCzech!
(I can almost hear her laughing at my accent.)
It means: What a chattering commotion
like the sparrows leaving Czechoslovakia!
She used to say, when we all left the house
and someone forgot one thing or another, laughing,
To je v pravovani jako brapci zCzech!
The other phrase is a tongue twister:
Strch prst skrs krk.
Roughly, Stick your finger
down your throat, which is to say
Swallow your tongue.

Mother, I have swallowed my tongue
as you swallowed yours
and your mother before you
her mother before her
into silence, like the gaps between snapshots
into silence, like the laws of salt water
that full body where it gathers and scatters
like the fish and birds whose curious songs
we keep on yearning to hear as our own,
listening for the sound
of the tongue in the blood
saying “home.”

At one time or another most poets go to Spain
and live in cheap rooms where their memories
thump on the roof demanding entry, scorning the doors.
“I choose my muse!” shouts the poet.  “Que lastima!”
wails the family. “Baile,” moans the wine in bodegas
sobbing with rich and compelling music.
It’s not a question of winning or losing.
The memories win through persistence, the music
through passion, the wine through oblivion, and the poet never
wins, no matter the prizes, and the poet never
loses, aunque siempre llenado con la perdida.
Meanwhile, the ocean keeps its appointments with the land,
the sky with the mountains, the bird with the seed, and death
with every living thing.  Eventually the poet goes home,
even Spanish poets who’ve been to Paris or Brazil
and the poems flutter away in scouring winds

In the summer of 2002, artists Anne Mudge and Diane Gage excavated a crack in a San Diego sidewalk in front of Hybrid Gallery in North Park. In the crack they planted and watered seeds. In the gallery they installed a crack garden, consisting of a piece of cracked sidewalk planted with herbs and flowers. They also displayed tools used in the process and a poem called The Toolkit.

Diane Gage: I find myself thinking of the development of human culture through two basic patterns, the nomadic and the settled. Urban settings combine both — substituting the motorized vehicle for the horse, the concrete and asphalt jungle for plains and forests, the yard for the field and the grocery store for the silo and cellar.

Anne:  Instead of using tools that create regular marks, how about thinking in terms of seed broadcast vehicles, something based on organic/biological models, like microbes, insects, animals, wind…

Diane: Or pedestrians? I like the idea and image of combining wanderer with planter. We could exploit cracks in the urban armor, plant gardens in bits of neglected urban space, invite walkers, at least, to relate to the earth under our feet, the ground of being.

Anne: We can restore human scale to making marks on the land.
A small step. 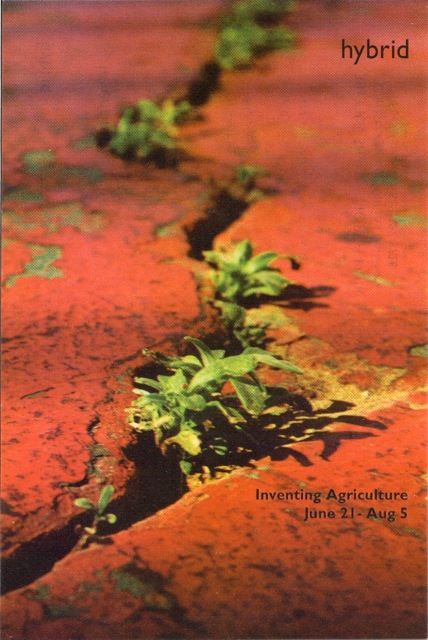 that have been shaped

by what lives within,

each form, each weight

And More of Diane’s Art: 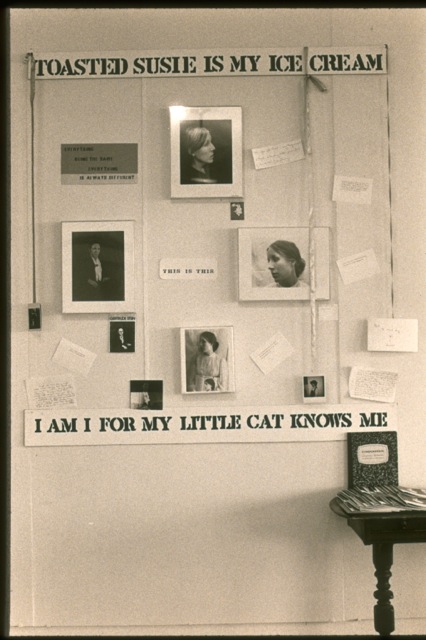 In Somebody Being Somebody, Diane posed as famous writers and artists such as Virginia Woolf, Gertrude Stein, Oscar Wilde for photos taken by photographer Connie Dolgin Rawlins. This photo shows one section of a larger installation at the CWSS Gallery in downtown San Diego that was documented in Cafe Solo and High Performance magazines.

White Thought in a Green Shade

White Thought in a Green Shade is from the Cold Comfort Quilt series where quilt forms and processes were used to shape non-traditional materials. This particular quilt consists of squares of interwoven tractor-feed computer and other papers, embellished with computer parts and sewn together. 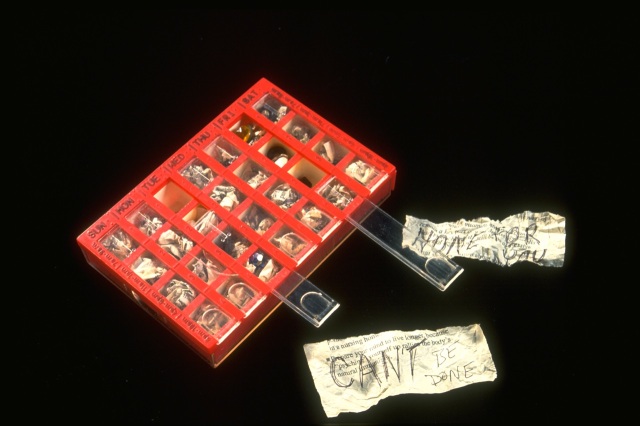 Mithridates is a artist’s book containing little poison pills of discouragement in a plastic pill box. Mithridates was an ancient king known for cultivating immunity to poisons by ingesting sub-lethal amounts of them every day.

Miss Havisham’s Closet, from the Rust series, appeared in an installation at the Oceanside Museum of Art. It’s made from silk printed with rust and the title refers to a character in Charles Dickens’ classic Great Expectations. 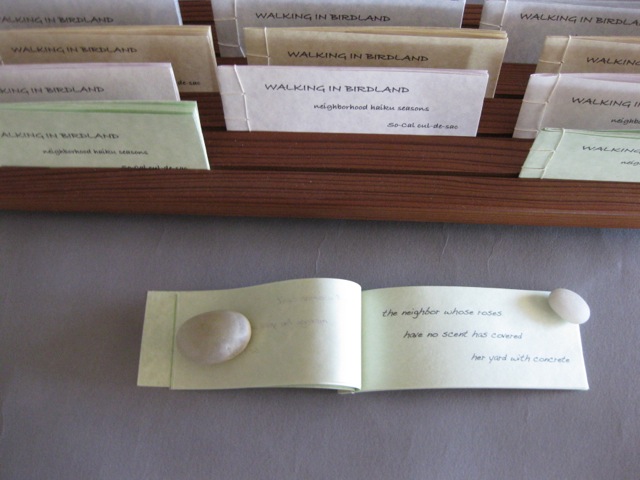 Find out more about Walking in Birdland in Interview, Part 1.