Collaboration: A Conversation with Diane Gage 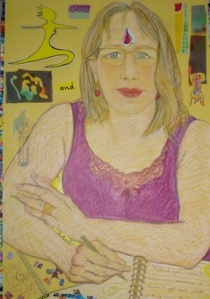 Seretta Martin:  I recently saw you give a reading at Protea Gallery in conjunction with an installation, called Textscapes, by the L.A. artist, Joyce Dallal. Were those poems written in response to Joyce’s artworks? http://www.proteagallery.com.

Diane Gage:  They weren’t written specifically in response to Joyce’s wonderful installation pieces, but I agreed to do the reading because of poems I’d previously written that resonated specifically with Joyce’s work. http://www.joycedallal.com.

SM: Well, I’ve included one here and the others can be found on the Showcase page.

You make the sign
of the hole in the heart
and mine echoes, hollow,
a rung bell, an oboe,
a saxophone moaning
with longing and loss

SM: Does it happen often that you find poems you’ve written that resonate with existing artworks?

DG: It’s only happened a few times and mostly in recent years. Artist Helen Redman had an exhibit at the turn of last year at Dance Place San Diego in Liberty Station, called Drawn From the Body. In it she included works from her Finding Footing series that seemed tailor-made for a longish poem I’d written many years ago, titled The Ground of Being. I sent her a copy of the poem and we marveled at the way they seemed to spring from the same source. http://www.birthingthecrone.com

Along the way we showed the poem and paintings to our mutual friend Anne Mudge, who was inspired to put them together in a Blurb.com booklet. That’s the most serendipitous collaboration I’ve ever been a party to, a delight from start to finish. http://www.blurb.com/b/3564847-the-ground-of-being

SM: Do you expect it might happen again that way?

DG: Let’s just say I’m not holding my breath. It feels like a once-in-a-lifetime sort of miracle. I do like to collaborate with other artists, which usually happens in a more deliberate fashion. Although I’m not a public artist per se, I’ve belonged for some years to an organization of public artists called Public Address where I dwell – as usual – at the margins. They and their work inspire me and sometimes I’m able to contribute poetry or a poetic perspective to their projects. Not to mention the fact that they seem willing to put up with having a poet wandering through. http://www.publicaddress.us

SM:  Are there any artists in particular you’ve worked with in that group?

DG:  Most recently I worked with Doris Bittar on a project of hers called “Tec Tang Tarab,” an installation with performances that took place in 2010 at the California Museum for the Arts in Escondido. For my part, besides participating in general creative brainstorming and exhibition tasks, I constructed a poem from three lines I “found” in three poems by a Syrian, a Chinese and an Aztec poet that functioned as the poetic touchstone of the installation:

Fate does not understand your speech

Yellow clouds beside the wall, crows near the tower

What shall we sing, my friends?

I was also responsible for the vocabulary used on an interactive word wall called “Tec Sayings.” It’s explained in a video on Doris Bittar’s website. You can see it on her website listed on the art page under “Installations,” 2nd thumbnail from the top. http://www.dorisbittar.com

On the poetry reading portion of the “Tec Tang Tarab” extravaganza, I read one of my personal touchstone poems called “Mother Tongue.” Here is an excerpt from that poem and the entire poem is on the Showcase page.

“What do we have to know each other by / those of us whose mothers have another tongue — / the slant of a cheek, a taste for song, / the lure of tears in a sigh? /… Listen.  My mother can dream / in a language I don’t know…”

SM:  Is Doris Bittar your only collaborator in the Public Address group?

DG:  Not at all. Over time, I’ve worked most often with sculptor Anne Mudge, who also belongs to Public Address. We did an exhibition together called Crack Gardening that you can see on the Showcase page. To give another example: in 2006 Anne had a sculpture exhibition, “Persistent Gestures,” at SDSU’s University Art Gallery. Curator Tina Yapelli asked if I would write a poem about Anne’s work for her exhibition catalog and I was thrilled and honored as I’ve long admired Anne’s art.  The poem is called “Mattering” and is in pantoum form, which I feel echoes the persistent gestures of her forms, just as its abstract language echoes the abstraction of her art. It was a delicious challenge, although the poem is not the most accessible one I’ve ever written. It’s quite cerebral, but suits her work.  http://www.annemudge.com

“Where does matter end and space begin?”
~Arthur Sze, “Before Completion” in The Redshifting Web

We are such stuff as glimmers gradually into being,
twisting repetitions in oceans of silence and slow time,
deep sea feather-bone dreams, neural sketchings.
Deep cell echoes of galactic relations, winking mirrors,

twist in entropic oceans of silence and slow time.
Encounters leave traces, a froth of intersections,
deep cell mirrors of galactic relations, winking echoes.
Umbel and sombra hint at the metaphysics of matter.

Encounters, a froth of intersections, leave traces –
multiplying centers, endless edges, seed and filament,
umbel and sombra hinting at the metaphysics of matter.
Here it springs, there it sticks, arch and anchor,

spun earth spins curving arcs of vision,
deep sea bones dream neural sketchings.
Twist by twist, tendrils touch the cloud of unknowing.
We are such stuff as glimmers gradually into being.

Where does space end and matter begin?

DG: Here I am with Anne in Balboa Park 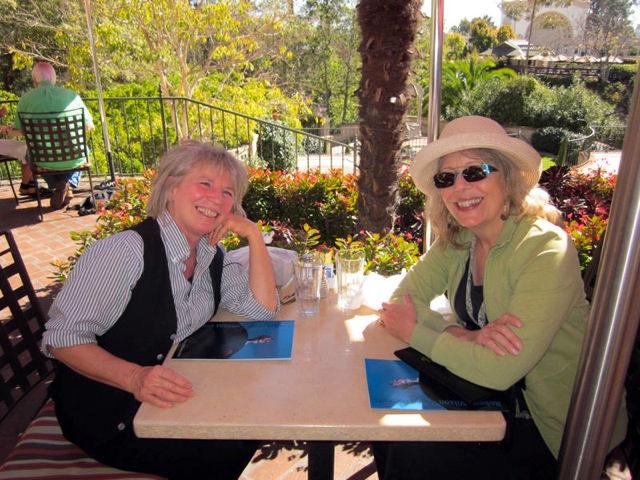 SM: Ann Mudge is a fine artist and also a good friend that I’ve known for years. I met her and artist / painter Nilly Gill back when The Artist Equity still exited here in San Diego. That seems like a century ago. I’ve invited her to be a featured artist here on this site and I hope that she will accept. But, let’s get back to you. Can we see more of your art and read more of your work on your own website?

DG: Alas, no. I haven’t managed to get one together. It’s been at the bottom of my to-do list for decades now! Since the last millennium! I think it may have something to do with my comfort at the margins, some kind of fluidity in my identity that makes collaboration fairly easy but standing in a spotlight, in the glare, outlined . . . not so much. I like what the Expressive Arts Community calls liminal space — existential impressionism, as through a glass fluidly.

SM: Well I hope someday you put a kaleidoscope of your projects, poems and visual art online. Is that something you’ll be working on soon?

DG: Just now I’m working on remodeling my 1950s kitchen, which has taken over my entire life to the point that, lately, I don’t even post my daily haiku on Facebook. When that’s done I plan to get back to a book arts project with the working title of “Tidy Packages.” For that one, I think of myself as Chief Archivist of The Museum of Me. Maybe something webbish might come out of it, who knows? Stranger things have happened.